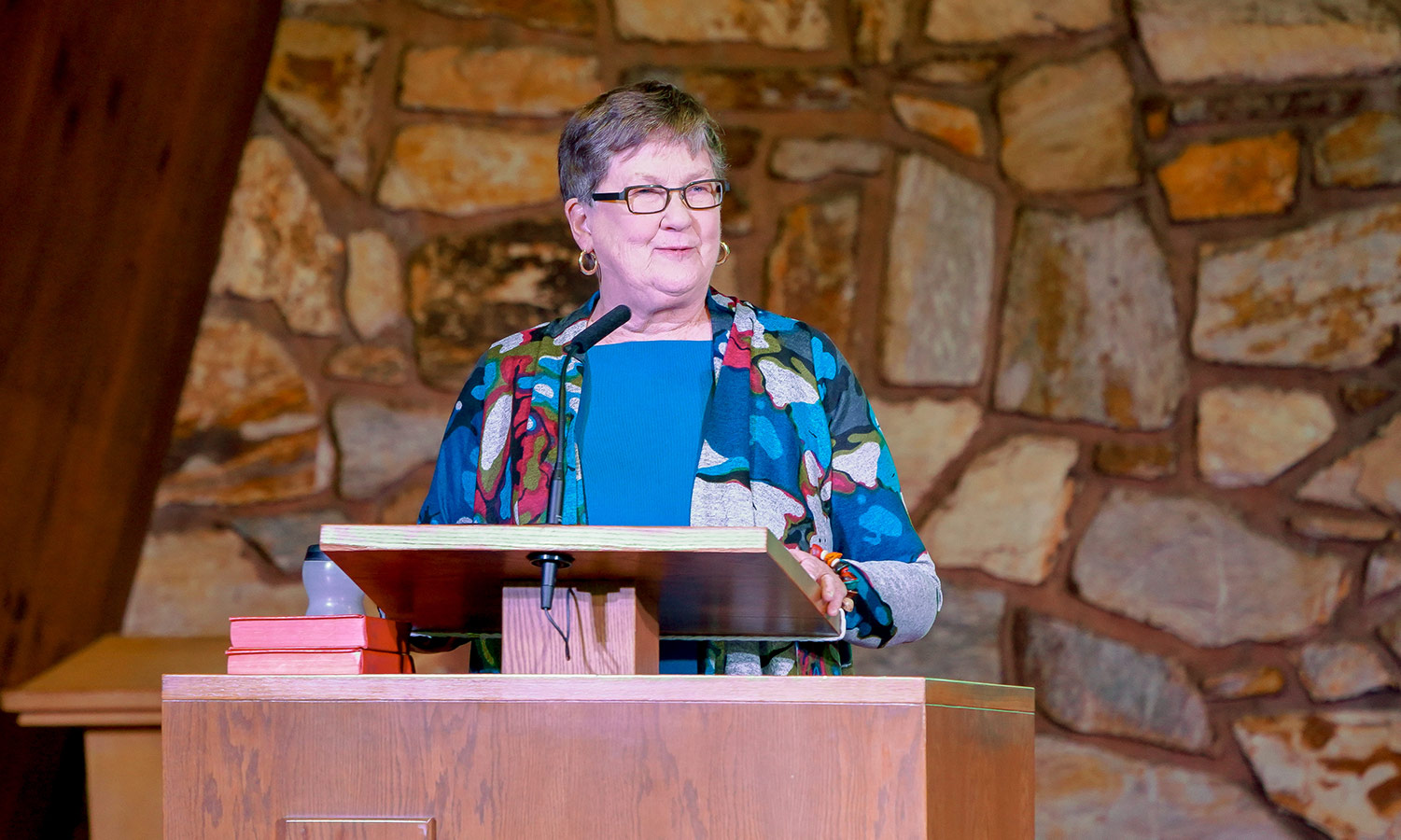 As delegates were getting an initial orientation to the rules and procedures of General Conference 2019, a local church nearby was being blessed with a sermon from a United Methodist lay woman with many years of experience as both delegate and observer.

Amory Peck, former delegate and lay leader from the Pacific Northwest Conference, part of the team chosen to deliver the Lay Address to the 2012 General Conference, took the time to bring her wisdom to the people gathered at Nameoki United Methodist Church. Her remarks were layered in a rich awareness of Methodist history and the slow march of justice. They were also deeply personal.

One remembrance Peck shared happened in 2008. The Faith and Order legislative committee at General Conference that year was in the midst of contentious conversation when leadership called for a musical break. Jorge Lockward, a gifted musician from New York City who was also serving on the committee, volunteered to lead the group in singing.

“Jorge jumped up to lead us in singing. He led one song, then another in Swahili. As the majority of us were struggling, he noticed that one of the African delegates already knew the song, so he invited her up to lead with us. It was a beautiful moment. She got to shed her interpreter and just be; a spirit-filled singer.”

As the committee finished singing, they returned to work on ¶304.3 and its prohibition of practicing homosexuals from ordination in The United Methodist Church. During the course of the conversation, both Jorge and Amory “came out as gay.” A range of responses were spoken into that space, but she shared that the “most virulent language about the evils of homosexuality” came from the delegate that had just joined Jorge in leading music. She continues:

“A bit later, while we were waiting for paper ballots to be counted, the chairperson again asked for a song, and Jorge again went forward opening up with the same upbeat Swahili song, “O, Who Will Build the Church Now?,” inviting the African woman for a second time to lead us.

Peck named this as a “tender moment” for her, one filled with inclusion and grace.

As she preached, Peck shared her own story as someone who grew up in a small Michigan town, a long-time member of The United Methodist Church, serving in leadership on almost every level. She also shared the ordinary details of meeting her wife Linda, and the multiple steps of affirming their commitment to each other as same-sex marriage became legal in their home state.

Although Peck stated that she was not a delegate to this year’s General Conference, it was clear that it didn’t mean that she wasn’t following along. Like many others in the LGBTQIA community, the denomination’s continuing debate over the full inclusion of people like her is far from an intellectual exercise. The continued prohibitions against the ordination of LGBTQIA persons, and against the recognition of their commitments to each other in holy matrimony, does real harm.

Some of those gathered for this service were planning to attend General Conference in nearby St. Louis over the next couple days but not everyone was sure if they were welcome. One member shared that they hadn’t decided yet whether or not they would, uncertain as to whether it would be a safe place for them.

Members of the LGBTQIA community back at the Dome where General Conference is underway, have been advocating for their full participation into a conversation that is very much about them, but not always involving them. It did not go unnoticed that there was nary a mention of LGBTQIA persons, or the harm the conversation could do, during the first morning of a special session called to address what is referred to as the “issue” of their inclusion.

Peck referenced a similar theme as she encouraged congregants to read a recent commentary by Jorge Lockward entitled “When Your Church Talks About You, Without You.” The patience of LGBTQIA United Methodists and their allies to remain in dialogue without progress is strained, to say the least.