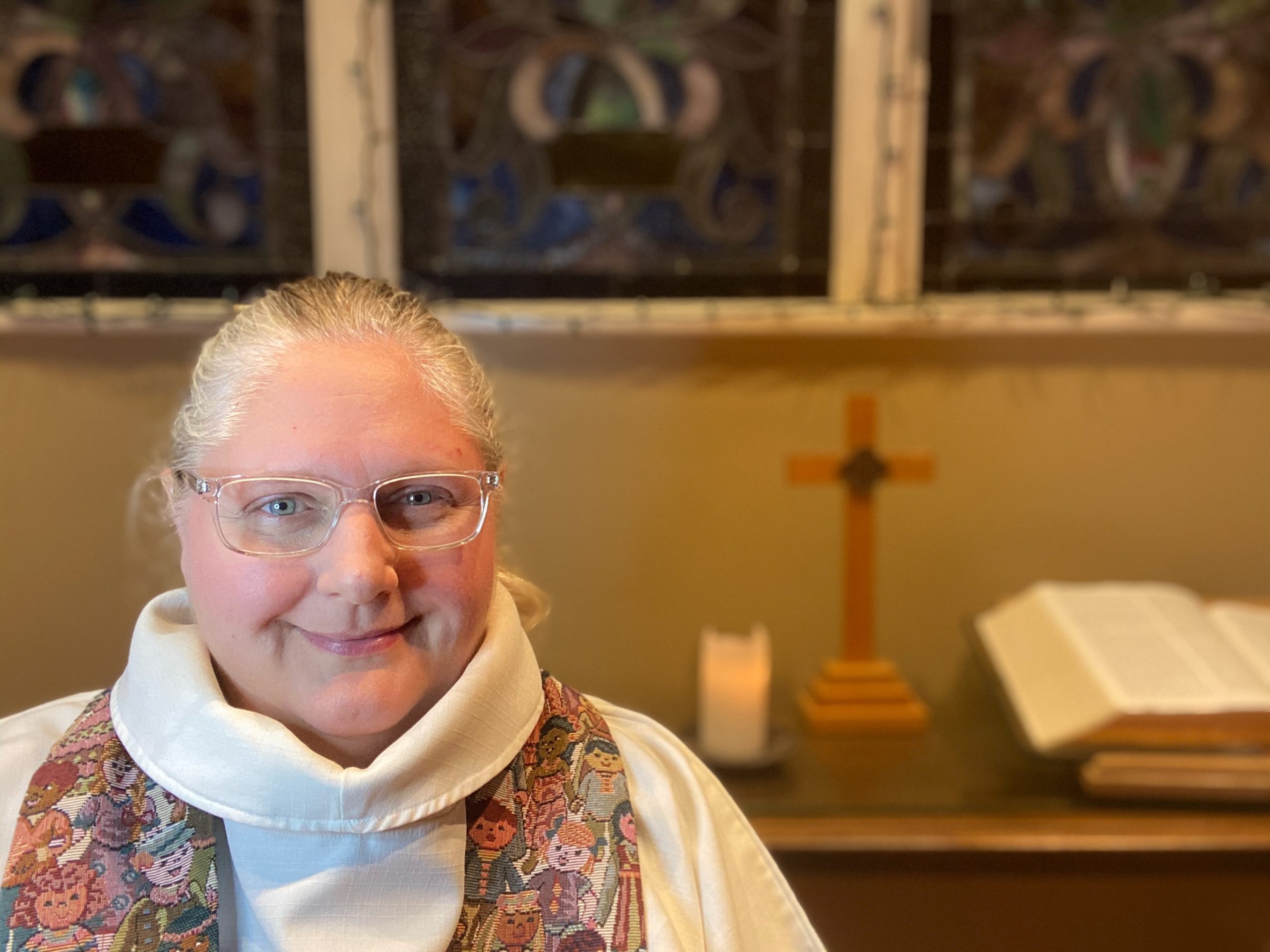 Why are you being called to the episcopacy at this time? What is it that you especially bring to the role of bishop with the current challenges facing our denomination and the Western Jurisdiction right now?
When I became the chair of the Order of Elders, I adopted a practice of sustained blessing at every gathering. This may seem like a small example, insignificant really, for what an episcopal leader needs to do, but it points to a sense of paying attention. We need leaders who can pay attention – to the world and its cries, to the church, and to all who call her home. Paying attention and hallowing the identity we are called to inhabit – all of us – this is what is needed during these times of pain and uncertainty.

Church membership is shrinking precipitously. White supremacy, Indigenous disenfranchisement, homophobia/transphobia, climate change, individualism, colonialism, violence, spiritual malaise – the list is long for the issues confronting us. I would add that our church is disconnected and fearful. This cannot be our way forward. We have an opportunity to repair the breaches among people and between people and the earth, and to build the church we all say that we want – to be a people of repair and reconciliation. This requires us to take the time to pay attention to the holy and the harmed and to honor that which is in front of us.

We need leaders who are in love with the church and the world, clear-eyed about challenges we face, and hopeful about what we might be. The Western Jurisdiction can be unapologetically justice-seeking, truth-telling, laity-driven, gospel-centered, hope-peddling, covenantally-grounded, connectionally-expressed, prayerfully-minded, and organically-embodied. Episcopal leaders set tone, model behavior, and cast visions even as they serve as the primary administrative officers of the church, ordering it through these times of deep institutional change. As a jurisdiction, we need leaders who can address both the scope and the depth of this work.

The work begins with telling the truth of our history and present, and mustering the courage to embark upon transformational change. This requires resilience, especially when done with grace and care.

There is too much fear and reactivity in the system; leaders are needed who can see the difficulties and the possibilities at the same time, and who have the capacity to move this diverse covenant toward the hope of the possibilities.

Describe how the last two years have affected your ministry.
Before lockdown, I called the public health department and asked for a training on how to enter into this time of social upheaval. Little did I know then exactly how much upheaval there would be. Over the past two years, the ministry settings I serve have been deeply impacted. The “new normal” has yet to emerge, but it needs to hold fast to core traditions and practices while embracing new expressions of covenant community. And, at the heart of both the historical and new needs to be a living heartbeat of connection, relationship, and community. Without this, the gospel message dies. This is what the pandemic has put in clear relief.

I serve an intentional community, a traditional congregation, and a congregation undergoing change. The intentional community ceased its public ministries of curating public discourse when the pandemic broke out. Taize worship ended. The houses stopped meeting together. Everything was interrupted. We have slowly moved back to embodied practices, but the pandemic continues to affect where and how we gather. There is much is yet to be known.

The traditional congregation in Seattle found its city vastly changed with fentanyl fueling crime and death. The congregation, small at the start of the pandemic, struggles. Members were put in care teams. Worship moved online for a season and joined with another congregation, one I now serve part-time. They continue to share worship ever other week. As the rest of society has dropped Covid precautions, we continue them out of care for health-compromised members. This leaves us becoming ever more anachronistic. And, we are left asking many questions: As part of Holy Communion, will we ever share the same cup again? Time will tell.

Ministry with clergy was a focus as I opened a virtual gathering space twice a week for over a year for support and care. Dozens of clergy found community.

For about 11 years, Sabbath has been my ministry focus. Sabbath, defined as the biblical principle and practice of justice and compassion, is the heart of The Well. I work a lot with people leaving Christianities that have harmed them. Just as the lockdown gave people a chance to reconsider work habits, it gave people permission, space, and time to examine how spiritual community builds healthy spirituality or foster toxic spirituality. The pandemic has intensified sabbatary work, helping people better understand their worth as a gift from God, not something earned or lost. It has made much clearer the work church can do for people and the earth. The pandemic’s trauma will make itself known for many years. Yet, we also have a chance to re-envision healthy spiritual community and connection.

It is with joy and enthusiasm that I endorse Rev. Katie Ladd for the episcopacy in the Western Jurisdiction. I have known and worked with Rev. Katie since 2013 when she received a grant from the General Commission of Religion and Race where I was on the grant committee as a director. I became the liaison to “The Well at QAUMC” and was excited and impressed by the intentional community she was fostering, especially as a community focused on practicing justice and compassion.

The Well, through Rev. Katie’s leadership, has provided a space for so many who want a more robust faith that expresses itself in silence and action.

Rev. Katie also provided space for clergy to explore, be creative, and be in community with one another during the beginning of the pandemic. She saw that clergy were needing connection and community and created a ZOOM “front porch” for us to check in with one another once a week. It lasted a year and helped ground us in the uncertain times.

She has led the order of elders in the PNW with integrity and grace, helping us see our holiness and blessedness. She is a gift to the UMC.

To Whom It May Concern:

I am delighted that Rev. Katie Ladd has allowed herself to be lifted up as an episcopal candidate. Katie has served as a mentor for me since I arrived in this conference fifteen years ago, and we have served together on multiple conference committees.

Katie is not your typical candidate full of political charisma, but she will approach this process – and her leadership – with deep thought and intentional discernment. She possesses a challenging, accessible, Wesleyan theology supported by creative and collaborative leadership.

Katie is deeply committed to the UMC, but she has little interest in institutional maintenance. Instead, she calls the Church to be its best self through ancient practice that is relevant for today. She has a unique ability to bring people together and inspire them to rise to their best selves even while submitting more fully to God’s will. She is a compassionate and prophetic leader who is willing and able to speak deep truth rather than relying on sound bites.

Katie brings a unique voice to the leadership of our church and I am honored to support her candidacy for the episcopacy.