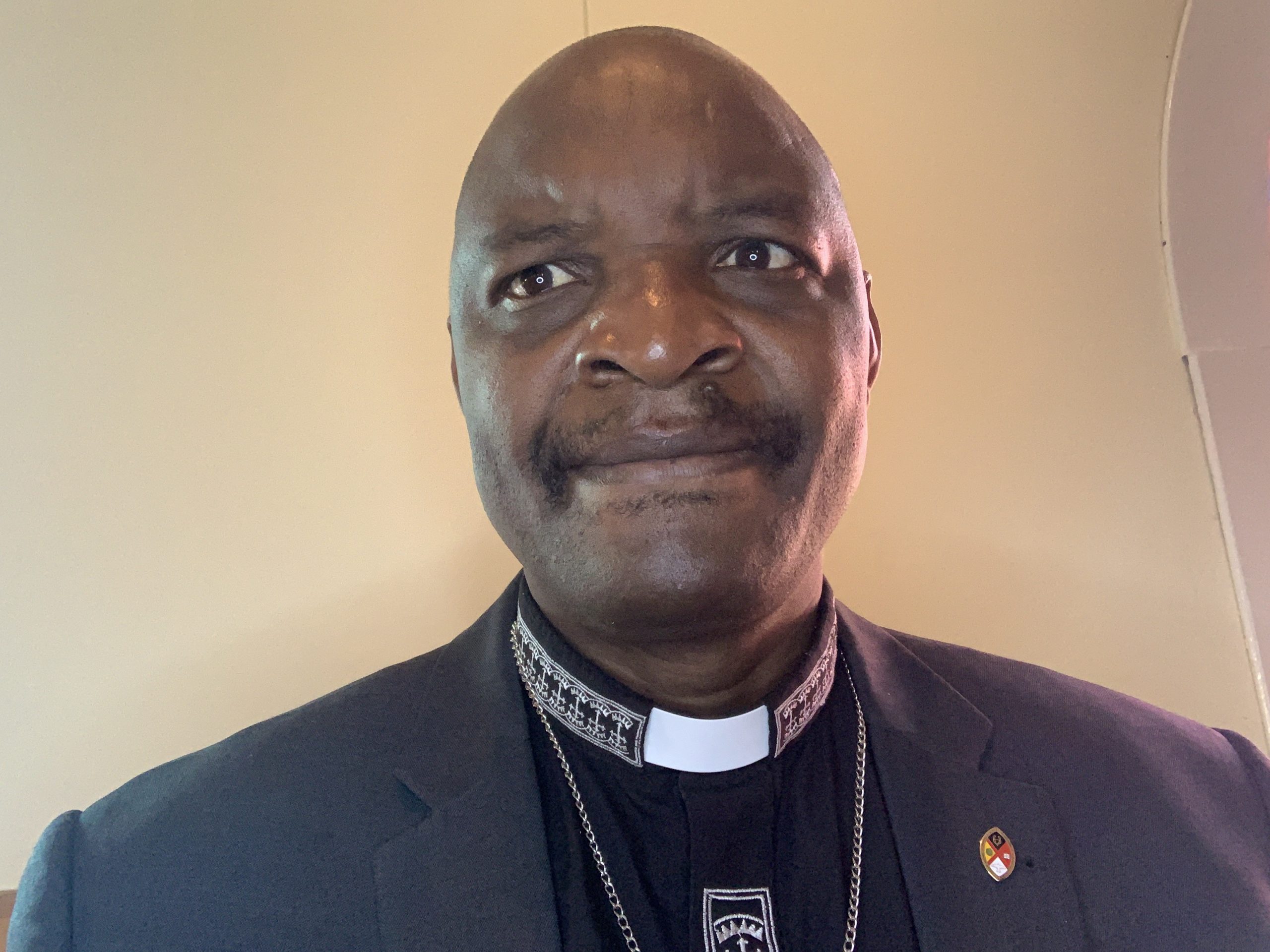 Why are you being called to the episcopacy at this time? What is it that you especially bring to the role of bishop with the current challenges facing our denomination and the Western Jurisdiction right now?
I was nominated from the California-Pacific conference, and I believe the nomination was a confirmation by other United Methodists of a call to episcopal leadership in times such as these in our denomination.

I bring a vast network of relationships from across the denomination, and across the dividing lines in our denomination. I do not compartmentalize myself as a progressive, conservative or centralist as I am simply an African United Methodist, and that may be the reason why I have relationships across the divides. I am a strong believer in prayer, social justice, evangelism and church growth. I believe the church is a place for all people and should work towards doing away with the different political labels to avoid functioning in silos.

We need to understand our denomination as worldwide, with the different cultures and contexts we do missions and ministries demonstrating our richness rather than being a problem. Each region brings experiences others can learn from if we focus on mission and ministries that brings people together and closer to Christ. As United Methodists we need to emphasize on how to share our faith journeys rather than political struggles. I learnt that emphasis on our regional political labels and political orientations have always further divided our denomination. I believe we need to focus more on ministry and mission organizing rather than political orientation caucuses we support and stand with. We need to change the direction of our denomination from becoming more caucused, and turn towards organizing more around the ministries and missions with impact beyond our regional boundaries.

The Western Jurisdiction may also need to do some work so that even the so called conservatives within the jurisdiction do not feel left out but can always feel that they are being seen as a part of the church’s mission and ministry in the region and beyond.

As an African with membership in Zimbabwe East Conference I believe, I will bring diversity, and a network of relationships from across the connection in the college if elected. This will make the jurisdiction richer as I bring different perspectives and ways of doing ministry and mission. I bring vast ecumenical experiences as I am currently serving in The United Church of Canada as a spouse of a GBGM missionary. Though, The United Church of Canada is generally theologically progressive, I am serving a shared ministry with the Anglican Church in the very conservatives diocese of Athabasca. My experience in the Theology, inter-church, inter-faith commission gives me vast experiences from dealing with challenging theological questions in the ecumenical movements in Canada

Describe how the last two years have affected your ministry.
I learned how to do services online in response to the pandemic and finding ways to continue the ministry of presence in the midst of a pandemic has been challenging in the last two years. Being an African migrant moving to a pre-dominantly Caucasian community and congregation in the midst of the pandemic in July 2020 being was a challenging. Although the Canadian society may be perceived as different, events happening south of the boarder influence opinions and perspectives in the Canadian Communities. This meant that the events which were triggered by the murder of George Floyd were permeating in the Canadian Communities. Therefore my arrival in a predominantly Caucasian society created some attention and I had to work through the stereotypes whilst responding to the challenges presented by the pandemic.

On the other hand as an elder with membership in Zimbabwe East conference the last two years have been challenging. As part of the CC Outreach Team, the writers and promotors of the Christmas Covenant legislation, which WCA and Good News have made efforts to label it as a progressive proposal across the three Africa central conferences. They have engaged in blackmailing tactics accursing me of promoting the acceptance of homosexuality in Africa. This has affected the efforts of working with like minded delegates and leaders from Central Conferences to promote the Christmas Covenant. However, we have find ways to work with Central Conferences, the United States Jurisdictions and General Conference delegates via zoom webinars, though a challenging undertaking.

Taking bold positions to name the neocolonial agenda of the WCA and Good News in Africa was faced with a back lash and personal attacks. In times like these I have learnt to depend more on prayer and the support of family, friends and colleagues. Being a GBGM missionary spouse send to serve ethnic minorities in Canada, got to be on an ecumenical appointment in The United Church of Canada, this has been used to attack and labeling me as someone with progressive influence therefore not an authentic African. When people take away your identity because you are standing up for justice, it is painful, hard and challenging, but there is always the spiritual nourishment that comes from knowing that you are working for justice and making The United Methodist Church a better place for all of God’s children.

In the midst of challenges I draw my strength and inspiration from our Jesus Christ’s life of standing up to injustice in society by simply identifying with those on the margin of society. Speaking truth to power a humble but powerful ways. Jesus showed us how to be in ministry with all people.

Relationship to Candidate: Colleague in Ministry

The Rev. Lloyd Nyarota models a broad vision for the worldwide UMC. A servant leader who casts a vision of God’s kin-dom with equity and belonging, trusted to lead in these fragile but fruitful season for a liberating ministry. I have served alongside Lloyd, facilitating workshops and seminars in Africa, did the first revision of the Social Creed since 1972. He was instrumental in the listening and writing sessions across Africa that led to the General Conference approving the Companion Litany to the Social Creed.

He served as the first Grassroots Organizer for Africa, entrusted with determining strategy, tactics, allocation of resources and public advocacy representing GBCS. Lloyd was instrumental in organizing revision of the global Social Principles to accurately reflects the positions, cultural values, and interests of the church in decolonization.

He is a coalition builder committed to the contextual theological task of the church; an advocate for those at the margins of society and resists oppression in all its forms; an astute facilitator of civil and congregational conflict, passionate about peacemaking.

Lloyd remains a trusted, articulate and seasoned representative of the church across the connection. As a thoughtful, prayerful and prophetic preacher he would continue to bring others to Christ and is a pastoral presence who models to younger and merging generations, ways to engage in creative ministry that leans into the future.

I met the Rev. Lloyd Nyarota at a conference in Lake Tahoe hosted by Western Methodist Justice Movement in 2014. Lloyd’s passion for justice, equity, and inclusion is one reason we became good friends and allies. He is advocating for a renewed and decolonized polity that values the diversity of our UMC connection and respects the unique missional contexts of our regions.

At a 2018 Love Your Neighbor Coalition gathering of central conference (CC) leaders with US progressives in Portland, OR I saw Lloyd’s skill at building relationships with everyone, especially reaching out to fellow Africans and engaging them in dialogue. This comes from his experience as a pastor, both in Zimbabwe and in Canada where he is currently appointed.

In the aftermath of the tragic GC of 2019, Lloyd joined other CC leaders to get the support of CC bishops for the creation of a US regional conference. When there were seeming disagreements with bishops on issues, Lloyd graciously listened and shared his ideas respectfully. He is adept in strategizing and a skilled organizer.

Lloyd is a leader of a central conference team that wrote the Christmas Covenant and promotes it across the connection. He is a gifted speaker and has presented on regionalization at multiple webinars for CC delegates, and US delegations. He can bridge language and relationships between the differing contexts of CCs and the US church.

Given his gifts and graces, Lloyd will make a great bishop.

Relationship to Candidate: Friend and Mentor in the Western Jurisdiction

I strongly recommend Rev. Lloyd Nyarota as an episcopal candidate in the Western Jurisdiction. I met him 10 years ago on a trip to Africa after being told by many of his social justice work. Since then, we have worked together on various projects.

Lloyd worked with LYNC (Love Your Neighbor Coalition) at the 2016 and 2019 General Conferences. He helped organize a LYNC sponsored gathering in 2018 that brought together 10 Central Conference (CC) leaders and 30 US progressives to find common ground. He has been to Palestine with UMKR and the Philippines with LYNC, done organizing in Africa for GBCS, and traveled extensively in the US, including the WJ.

Lloyd is a key part of the CC led team that wrote and promotes the Christmas Covenant to make the UMC less colonial/US centric, promoting regional equity and contextualization.

Lloyd’s strengths are many:
• a passion for justice rooted in scripture. His concerns include peace, poverty, people’s rights, climate change and indigenously respectful development
• speaking and taking risks when others are silent
• deep personal faith that connects with others to invite spiritual growth
• powerful, insightful speaker and writer
• humility and listening deeply while also lifting up a vision for the church
• extensive, effective cross-cultural experience
Together this allows him to bring fresh insights to being a WJ bishop while providing leadership that resonates in WJ settings.