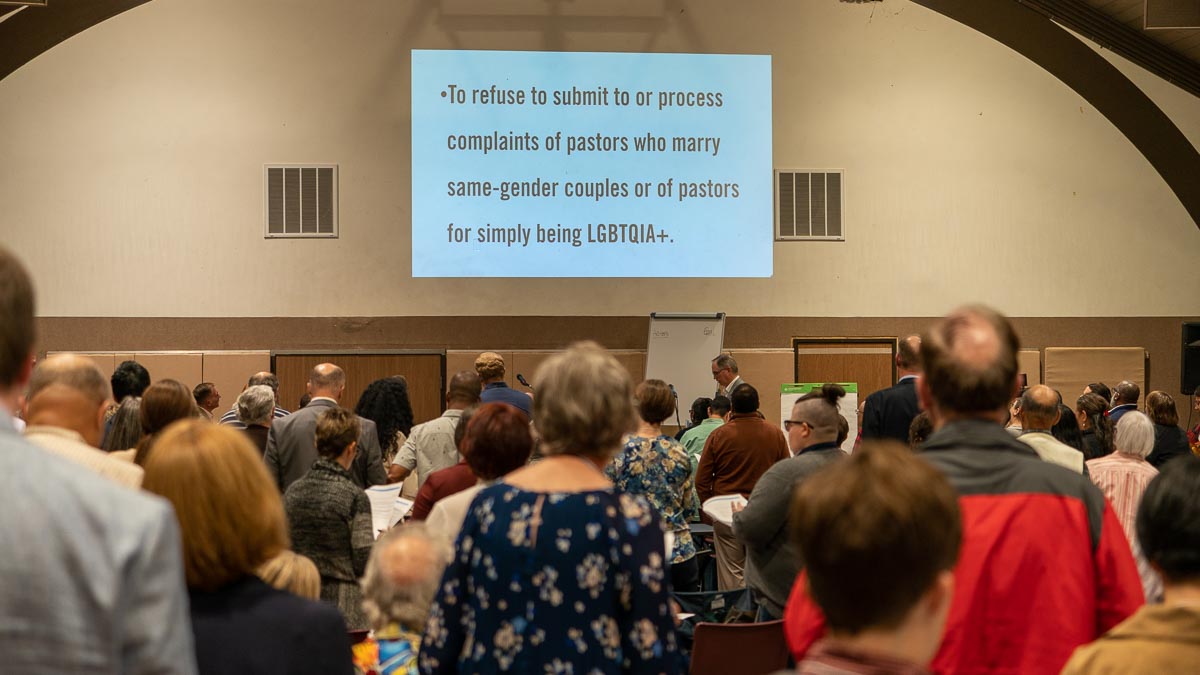 The following declaration was presented to the Western Jurisdiction Fresh United Methodism Summit on Thursday, November 14, 2019. It was received with enthusiasm by those in attendance.

Theological Declaration of the Western Jurisdiction of The United Methodist Church

And God promised:  “I will pour out my Spirit on all people. Your sons and daughters will prophesy. Your young will see visions. Your elders will dream dreams.” (Acts 2:17 CEB)

We believe that God’s Spirit is poured out onto all God’s people.  We stand firmly within the best of our biblical and Wesleyan tradition in order to maintain a witness to the wideness of God’s grace in a broken world in need of Christ’s healing, liberating love.

In view of the decades-long discrimination of our LGBTQIA+ siblings and in light of the Special General Conference 2019, which approved—by a narrow margin—a plan that was not only largely unconstitutional but also has pushed The United Methodist Church off of its theological foundation, we refuse to yield to a plan that replaces grace with punishment and that abandons robust engagement of scripture to biblical literalism. We refuse to limit the movement of God’s Holy Spirit in the lives of all God’s beloved children. We stand firm in grace and love.

The Apostle Paul writes to the church in Corinth grappling with divisions. Using the Eucharist, Paul alludes to their divisions but affirms that they are one body:

As one body in Christ, we affirm and pledge to proclaim—

In the context of constant disputes and wars between nations and peoples, the 8th century BCE prophet Micah casts a vision of a world where fighting will cease:

In the last days the mountain of the Lord’s temple will be established
as the highest of the mountains;
it will be exalted above the hills,
and peoples will stream to it.
Many nations will come and say,
“Come, let us go up to the mountain of the Lord,
to the temple of the God of Jacob.
He will teach us his ways,
so that we may walk in his paths.”
The law will go out from Zion,
the word of the Lord from Jerusalem.
He will judge between many peoples
and will settle disputes for strong nations far and wide.
They will beat their swords into plowshares
and their spears into pruning hooks.
Nation will not take up sword against nation,
nor will they train for war anymore.
Everyone will sit under their own vine
and under their own fig tree,
and no one will make them afraid,
for the Lord Almighty has spoken. (Micah 4:1-4 NIV)

Therefore, with Micah we envision a different world and church where we will do everything in our power—

The writer of the Letter to the Ephesians reminds his community about faith that is grounded in grace:

“For by grace you have been saved through faith, and this is not your own doing; it is the gift of God—not the result of works, so that no one may boast.” (Ephesians 2:8-9 NRSV)

Claiming this gift of God, we vow to stand strong in the practice of our faith and polity, grounded in our Wesleyan Way of Grace—

God speaks these words to an ancient community living in exile through the 6th century BCE prophet:

“Don’t remember the prior things;
don’t ponder ancient history.
Look! I’m doing a new thing;
now it sprouts up; don’t you recognize it?
I’m making a way in the desert,
paths in the wilderness.” (Isaiah 43:18-19 CEB)

Claiming God’s ability to do a new thing in our 21st century context as God has done in every important moment of history, we seek to become—

To the glory of God!