The Rev. Cedrick D. Bridgeforth, director of innovation and communication in the California-Pacific Conference, has been elected a bishop by The United Methodist Church’s Western Jurisdiction.

He becomes the first openly gay African American man to be elected a bishop in The United Methodist Church.

Delegates elected Bridgeforth on Nov. 4 at the jurisdiction’s meeting at Christ United Methodist Church in Salt Lake City, on the 18th ballot. He received 73 votes out of 93 valid ballots cast. He needed 63 to be elected. Current Western Jurisdiction rules require two-thirds of valid ballots.

“It is the church where I found purpose – even when it felt like it was chewing me up and spitting me out,” Bridgeforth said, with his husband Christopher Huck-Ortiz standing next to him. 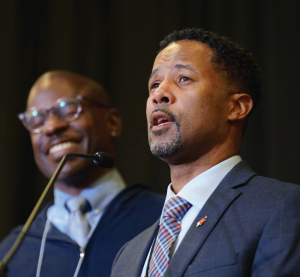 Bishop Cedrick Bridgeforth addresses the delegates, guests, and his new episcopal colleagues, shortly after his election. His spouse, Christopher Hucks-Ortiz, stands at his side. Photo by Patrick Scriven (PNW) for the WJ.

Bridgeforth was the second bishop elected at the Nov. 2-5 meeting, following Carlo Rapanut.

Bridgeforth was elected by the Western Jurisdiction’s 96 delegates, an equal number of United Methodist clergy and laity from the eight annual conferences — church regional bodies — forming the jurisdiction. The jurisdiction encompasses the 12 westernmost states in the U.S. and the territories of Guam and Saipan.

The assignments of bishops in the Western Jurisdiction for the next two years will be announced later in the week.

His term of service begins Jan. 1. In the United States, bishops are elected to serve for life.

Bridgeforth, an elder in California-Pacific Conference, has directed its office of innovation and communications since 2021. He previously has served as lead pastor of Grace United Methodist Church, a historically Black congregation in Los Angeles and before that as lead pastor of Santa Ana United Methodist Church, a multi-ethnic congregation. During that time, he was also director of academic programs and outreach for the Ecumenical Center for Black Church Studies at the University of La Verne.

He also served as a district superintendent in the California-Pacific Conference from 2008 to 2015 and cabinet dean from 2011 to 2015.

He was chair of Black Methodists for Church Renewal, the denomination’s official Black caucus, from 2013 to 2016. He also was a board member of The United Methodist Church’s pension agency — now called Wespath — during the same period.

Bridgeforth also has written books on leadership and prayer including “20/20 Leadership Lessons: Seeing Vision and Focusing on Realities” and “Thoughts and Prayers.” In 2021, he published his memoir “Alabama Grandson: A Black, Gay Minister’s Passage Out of Hiding.”

A native of Decatur, Alabama, Bridgeforth is a U.S. Air Force veteran. He holds a bachelor’s degree in religion from Samford University in Birmingham, Alabama, a Master of Divinity from the Claremont School of Theology in Claremont, California, and a doctorate in organizational leadership from Pepperdine University in Malibu, California.

In The United Methodist Church, bishops are ordained elders who are called to “lead and oversee the spiritual and temporal affairs of The United Methodist Church.” Bishops, in consultation with district superintendents, are responsible for appointing clergy. They also preside at annual conferences, jurisdictional conferences and General Conference, the denomination’s top lawmaking assembly.

Bishop candidates typically are endorsed by their home conference or other groups within the denomination. This year, the Western Jurisdiction invited each of its annual conferences to lift up multiple potential candidates, with the hope of drawing the circle wide. The elders interested in being considered for election were then asked to signal their willingness to be considered by Sept. 1. Throughout, the jurisdiction has put an emphasis on discernment by both the candidates and the voting delegates.

He and other new bishops are coming aboard as the denomination deals with the continuing fallout of the COVID-19 pandemic and rising congregational disaffiliations amid a denominational splintering.

In his post-election remarks, Bridgeforth expressed his gratitude to the bishops who had appointed him to serve in various ways and spaces. In addition, he praised his fellow delegates who he served with and chose to elect him bishop.

“I’m glad to be among you, you giants of justice, you lovers of mercy,” he said. “May we always be do-ers of good. Amen.”