WJ Fresh Day 2: A morning of inspiration, an afternoon of innovation 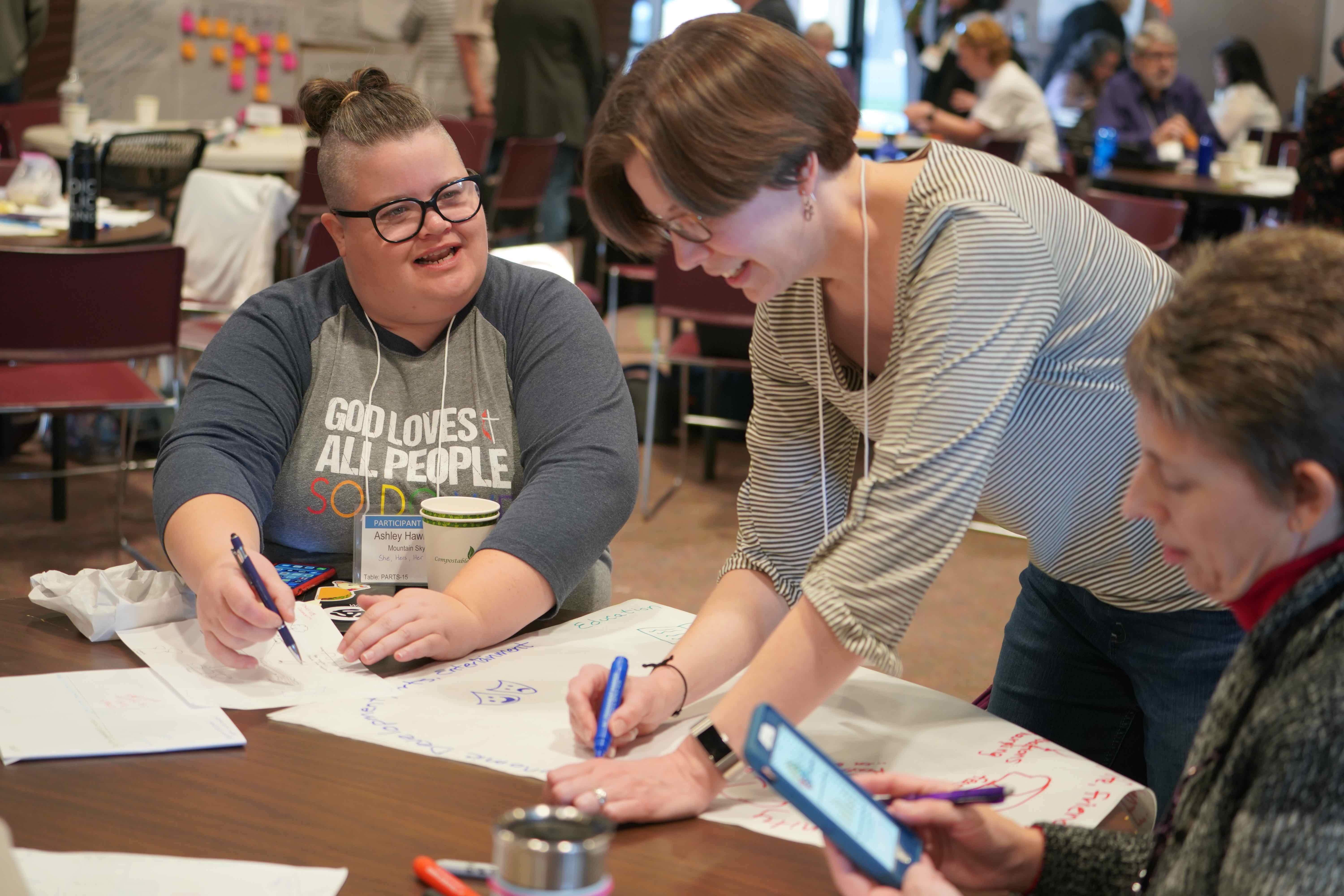 Day two of the Western Jurisdiction Fresh United Methodism Summit began with a presentation of the WJ College of Bishops’ Safe Harbor Declaration, issued on November 6 at the Council of Bishops meeting at Lake Junaluska.

“It is your declaration,” said Desert Southwest Conference Bishop Robert T. Hoshibata, president of the College – and a few minutes later it became that, in a literal sense.

“Thank you, Bishops!” rang out from someplace in the crowd. Loud applause erupted and was sustained for a full 15 seconds.

“Given the work that all of you have done, putting yourselves out there – at risk – even though this is not a jurisdictional meeting, I think it is important for us as a body to affirm what you have done so that everyone knows that we as Western Jurisdiction United Methodists are fully behind the action that our College of Bishops is taking,” he said. Kuan called for a vote of affirmation “so that everyone will see this is not something that we take lightly as Methodists in the jurisdiction.”

The “motion” at the unofficial meeting received two loud seconds.

“I didn’t think this was an annual conference,” quipped Hoshibata, adding, “We are humbled by your words.”

He asked that those in agreement stand to reflect that position and attendees unanimously took to their feet, applauding loudly.

There were questions, then – about what “safe harbor” really means in practical terms.

Bishop Karen P. Oliveto of the Mountain Sky Conference said that she would reject even so-called “friendly” complaints against clergy that are strictly based on sexual orientation or the fact they had performed same-gender marriage ceremonies. The process “creates harm,” she said, “and I am unwilling to do that with people who have been properly vetted. There is no second-class citizenship in the family of faith. If I receive any such complaints, I will file them away.”

“I am with Sister Karen,” Bishop Minerva G. Carcaño of the California-Nevada Conference said. “I will set aside complaints that are simply based on (the person’s) gender identity and sexual orientation.”

Patrick Scriven of the Pacific Northwest Conference asked how the term “moratorium” factors into the Safe Harbor concept.

“We don’t understand what we did to be a moratorium,” said Bishop Elaine Stanovsky of the Greater Northwest Episcopal Area. “You can proclaim a moratorium, but it doesn’t stop anyone from making a complaint. A moratorium is someone’s hope, but there’s no teeth in it.”

The Safe Harbor Declaration, Bishop Grant Hagiya said, was a way to share risk. He reported that there is a “strong contingent of the Council of Bishops” – a growing number within the ranks of retired bishops – who have agreed to perform same-gender marriage ceremonies in lieu of active clergy doing so, to remove them from the threat of reprisals. Retired Bishop Mary Ann Swenson, the only retired bishop present, stepped up to say, “And I’m one of the bishops willing to do so,” a statement met by appreciative applause.

As active bishops, “It is humbling to get your affirmation and your praise,” Carcaño noted, adding, “but we build on the hard work of bishops and conference leaders who have come before us — a long line of justice leaders.”

And it was hard work that dominated the afternoon and evening. Hagiya led an intensive process based on the book, “Sprint: How to Solve Big Problems and Test New Ideas in Just Five Days,” written by Jake Knapp.

“We’re gonna do two days in half a day, so we’re really gonna ‘sprint,’” he said. “The motto for today is, ‘fake it till you make it.’ We will be moving from the tried and true.”

“All those things need to start kicking into you,” he said. “We have 24 hours to discard the ‘old tapes.’ We’re going to try to do that.”

The Sprint process involves distilling a big idea — a lofty, unmanageable goal — into smaller, achievable outcomes, and, using words, pictures, and maps, working together as a team to arrive at a plan of action.

“What 4 percent change in our DNA is going to accelerate our growth?” Hagiya challenged.

On Saturday the tables’ best ideas will be posted and participants will vote on them. The goal is to arrive at a single operative idea for taking the jurisdiction forward to January 1, General Conference 2020, annual conferences in the summer, and the Western Jurisdiction Conference in July in Billings, Montana.